The Secrets Behind Sourdough Bread

By Lynn Blamires Content Writer for My Local Utah

Sourdough is the oldest leavening agent known to man. In the Encyclopedia of Food Microbiology, Michael Gaenzle writes: “One of the oldest sourdough breads dates from 3700 BCE and was excavated in Switzerland, but the origin of sourdough fermentation likely relates to the origin of agriculture in the Fertile Crescent several thousand years earlier, which was confirmed a few years later by archeological evidence. Bread production relied on the use of sourdough as a leavening agent for most of human history; the use of baker’s yeast as a leavening agent dates back less than 150 years.”

Traditional sourdough bread like the cross-hatched artesian loaf uses sourdough as the only leavening agent. These are referred to as Type 1 Sourdough breads. It may take more than 12 hours for the bread to rise sufficiently in the proofing process to be ready for the oven. The bread is chewy and the flavor is more sour.

In Type II Sourdough Bread, yeast is added to leaven the dough. This is the type of bread you will get at a restaurant when you order sourdough toast with your breakfast. The loaf will look like a regular loaf of bread instead of the flatter artesian loaf. The sourdough flavor will be milder and the slice of bread will be softer. It is that sourdough flavor in a milder form that is preferred by some over the more sour and chewy Type I Sourdough Bread.

Obtaining Your Own Sourdough Starter

There are several ways to get your own starter:

Some people use water and flour to feed the starter, I prefer to use whole milk, flour, and sugar. When I am maintaining the sponge, I take it out of the refrigerator – add one cup of whole milk, one cup of flour, and a tablespoon of sugar. I stir it well and set it on the counter overnight. Note – it is important never to stir your sponge with a metal spoon. Always use a wooden or non-metal spoon, metal will kill the starter.

The next morning it is fresh and ready to use. If you think you have more than you need, just throw some of it away. It is more important to keep it fresh than to figure out how to use all of it.

I have also just taken it right out of the refrigerator and put it in my recipe.

Substitutes for Yeast in Pandemic Times

Because wild yeast is present in all flour, making your own starter can assure a supply of bread for your family when yeast is in short supply. This will be for type 1 sourdough bread.
For type ll sourdough bread, use equal parts lemon juice and baking soda. So if a recipe calls for 1 teaspoon of yeast, you can use half a teaspoon of lemon juice and half a teaspoon of baking soda. Keep in mind that the bread will not need the typical proofing time and the dough will begin rising right away.

Sourdough As a Connection with Pioneer Heritage and Romantic History

Sourdough became popular with the gold miners both in Alaska and California. “Along with a predilection for gambling… the miners brought with them or made bread starters. The starters were so important that they would cuddle them on cold nights so the yeasts and bacteria that made them viable didn’t die,” writes Avital Ungar for San Francisco Travel.

San Francisco is famous for its sourdough bread. However, if you want the San Francisco flavor, you will have to go the San Francisco to get it. Even if you could get a starter from there, it would not take long for your sponge to take on the airs of where you live. The conditions and atmosphere are unique in whatever part of the world you live. 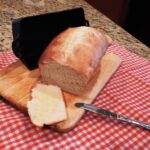 *This recipe can be assembled in a bread machine using the dough setting. I like to use the bread machine because the setting and proofing are so consistent from batch to batch. *Remember, it is important never to stir your sponge with a metal spoon. Always use a wooden or non-metal spoon, metal will kill the starter.